We've had a busy year working on the itty bitty details that make all the difference when starting your own streetwear clothing line.  We've been there, seen it, done it...and nearly got the T-shirts!

Every stage of development has been analysed intricately and debated and deliberated over; from labels to logo, from website to weight of cotton.  So here's an abridged version of our year so far...


When, on one dismal day in March (after yet another unresolved discussion on our logo design), Gaz stated that God had emailed us telling us that we had definitely gone crazy, we decided we needed a break.  That break came in May, from both a hefty workload and the longest winter on record.

Cornwall came good and we soaked up the sun and witnessed some pretty amazing waves, particularly at a little known beach named Duckpool.  We were so inspired by good company and spectacular scenery, that we began our gorilla marketing campaign and left a little adhesive reminder of Voodoo Street behind.  Anyone spotted it?

The word on the street!

Renewed, we hit the high street in June to conduct some market research.  Our general approach was to shove a page of designs under the noses of unwitting shoppers and blurt out our stock phrase: “We’re not selling (not yet anyway) and we don’t want any personal details!”   Maybe it was that we weren't talking about energy supplies or maybe not.  The fact is we we were overwhelmed by positive feedback.

Light at the end of the tunnel...

There followed a period of web development, sourcing suppliers and acquiring samples of our designs, which is ongoing.  We also managed to squeeze in an inspiring visit to Giffords' Family Circus, a surreal, vintage affair.

Halloween, our favourite time of year, was spent riding the ghost train out into the darkness of the Severn Valley.  The event is gathering momentum and for once, we didn't feel over-dressed.  This year's costume inspirations were equal parts Day of the Dead, Voodoo Priest, Mighty Boosh and Tim Burton heroine. 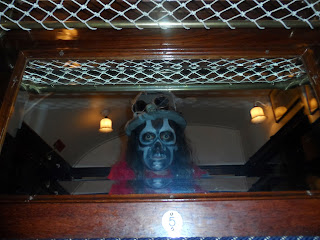 The dark nights, comfort food and frosty mornings have firmly taken hold (good job we're working on some awesome sweatshirt designs).  The moon is almost full and as every Voodoo aficionado knows, the lunar phases influence the magic....so watch this space.

Posted by Voodoo Claire at 05:37 No comments:

Voodoo Claire
I'm Voodoo Claire, one half of Voodoo Street, an independent UK clothing brand established in 2013. Gaz designs and I provide the untrained "eye", the official blog and am pretty adept at shooting the breeze on social media. We're both into junk shops, VWs, classic cars, vintage, steampunk, skating and hotrods to name but a few. We're also partial to skulls and are drawn to old rusty things! We have an online store www.voodoostreet.com. You'll also find us on Facebook and the usual suspects, but if you prefer face to face, we can often be found camping in our van or at summer festivals.